When I started this blog, I thought I would fill it with funny stuff. Don’t worry, there’s plenty of that. As I continue finding my voice through writing, I find myself leaning towards wanting to share the beauty of motherhood. It’s not always beautiful. Sometimes, it’s scary, it’s ugly, it’s hurtful, it’s lonely, its desperate, it feels like it will break you. It’s also magic. It’s unbelievable. It brought my soul to life. (That’s some really sappy BS, but I’m serious.)

My three strong willed daughters test me to my limit every single day. Sometimes, they smack me. Sometimes they poop on me (or in that DAMN BACK PACK). Sometimes, they frustrate me. How freaking hard is it to put on shoes, a coat, and your backpack? It takes 75,000 million hours to try to get to preschool on time. We’re always late. Whatever. Sometimes, they take the entire box of goldfish crackers, dump them on the floor and stomp on them like they’re Lucy and Ethel stomping on those grapes in the wine barrel. Sometimes, they pull each others hair and throw punches. Sometimes, they run down the street half naked trying to follow their Dad’s car to work at 6 am on a Tuesday morning. Sometimes, scream so loud that I’m POSITIVE my neighbors think we are running an insane asylum. (Which, is pretty accurate.) 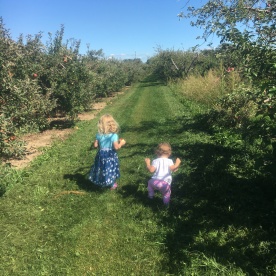 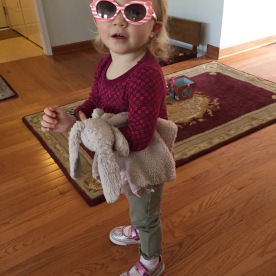 That’s kid shit though. That’s what they do.

My strong willed daughters also shower me with unconditional love. I spent my entire life needed that. Craving that. Searching for that. I know my parents love me. Sometimes, I think maybe my husband loves me. But, this is a different love. My favorite is when Fiona snuggles up with me and says, ” I know you told me, but I want to tell you too that I made you a mommy.”

… I melt into a pool of emotions when she says this.

When I’ve been out for a few hours talking to my Drs about my crazy ass PPD/PPA, my Maeve girl comes CHARGING through the house to hug me, as if I’ve been gone for a decade.

When Lucille wakes up in the morning the first thing she does is smile, reaches up for you to pick her up, and then nuzzles her sweet face into your neck and gives the BEST HUG EVER. I mean she’s almost nine months old and her hug game is STRONG.

All of these things are great, but what prompted me to write this is that the past couple days and weeks have been a little hard over here. Life stuff, you know? There’s always life stuff. But, this morning I felt Fiona crawl into bed with me, she put her arm around my chest, put her nose to my nose, and woke me up with nose kisses.

MY FOUR YEAR OLD WAKES ME UP WITH NOSE KISSES.

It is the absolute best way to wake up.

I”ve been doing a lot of yelling. I’m stressed. It has nothing to do with them and yet all I do is take it out on them. I’m struggling with the anxiety hard core right now. I hate it. It’s all consuming. But, my precious daughter wakes me up with nose kisses and that’s what keeps me going.

These kids are alright, you know? They’re worth every minute of it, the good and the bad.