Children. Ah, they come out all cute and snuggly, don’t they? Newborns have this smell, which I’m sure baffles scientists all over the world, but the smell. The smell of a newborn just touches you right to your soul. They’re fresh. They have the entire world at their fingertips. They are the future.

HAHA. Let’s talk about that future that I am currently living in.

This morning, like most mornings, I tried to use the bathroom by myself. It never happens. So, there I was about to flush and in comes hurriciane Maeve (my two year old). I asked her very politely to leave. Actually, that’s a complete lie. I told her to get the hell out of the bathroom, and she refused. She refused, because she wanted to see what was in the potty. ” SHOW ME POTTY! SHOW ME POTTY!”, she screamed over and over. I had to show her, and also lost another little bit of my dignity.

*I have no idea why Fionas foot is involved in this picture.*

Toddlers are an endless amount of joy and absolute insanity.

This same child of mine also enjoys licking fleece pajama pants. So, watch out. If you come near her with a nice pair of cozy plaid pj pants, Maeve will try to lick your leg, and then say, ” Yum!”.

This beautiful, crazy child of mine also tried to eat snow of a strangers car. We didn’t notice at first, we were all in the parking lot, trying to load the kids into the van. We turned around and there she was, putting fistfuls of dirty car snow in her mouth.

She has a strong immune system, I”ll give her that.

My eldest did something really cool yesterday. I went to an amazing support group for women dealing with all kinds of postpartum issues. I was only gone two hours. As I walked in the front door, I noticed Fiona was wearing a little pin that my cool cousin Wendy (Hi, Wendy!) had sent me a few years back. I asked her where she got it. She replied, ” In your drawer.”

I asked her what she had done while I was at my group and she said, ” Went through all your drawers.” Oh, ok. Great. My four year old knows I own thongs. Just another day in the life of a mom named, Kate.

” Mommy, how come your underwear is broken?”

I love it when my kids do random, weird shit that they shouldn’t have been doing, and then they try to blame the 10 month old, who can barely walk.

” Maeve, why did you eat all of the fruit snacks in the drawer?”

Lying is not Maeve’s forte.

*This picture was taken when it was 90 degrees out in July.*

Fiona will pull out every single dress up dress from the basement, and leave a huge mess behind. You can clean it up, or put the fate of your life in a pair of Cinderella shoes that you may trip over at any point.

You don’t know fear, until you’re suddenly crashing into the ground due to tripping on a princess shoe and possibly a tiara.

I can’t really complain about my 10 month old. She’s pretty chill, except when she’s feeding the dog her entire dinner. Sometimes, she encourages their bad behavior with her laughter. Her big sisters LOVE to make her laugh. Even if that invovles throwing  food across the table at dinner.

*She usually sleeps through the sounds of her sisters screaming and running in circles.* 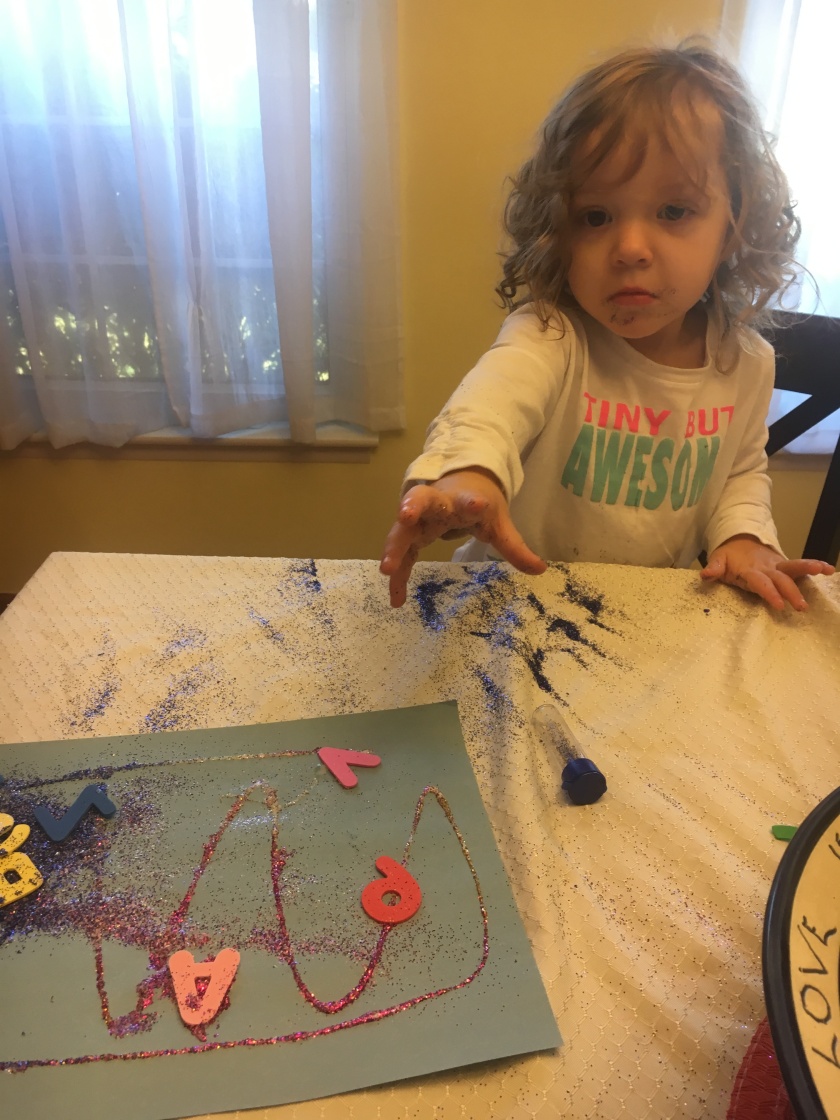 I have faith that someday I’ll be able to use my bathroom alone.