When someone asks me if I have time for myself, I usually crack up.

SELF-CARE? Are you kidding me? I haven’t showered in four days, I can’t remember when I brushed my teeth, I don’t know whose socks I”m wearing. I have three girls under five. It’s a miracle that we even leave the house somedays. I mean, I”ve left the house in my pjs and slippers by accident for preschool pick up once or twice.

(EXCEPT, when grandparents are in town and I throw my children at them, so I can go take a three nap.)

So, anyway, my friend (Hey, Angela!) asked me if I’d like to try some stuff that I could easliy fit into my crazy ass schedule, and create a even just a bit of me time.

Before, I tell you about this stuff, I want you to know that I’m not selling or pressuring  anyone into buying anything. I just really wanted to share this, because this stuff helped me SO much.

There’s this company called Arbonne. I had kind of heard about it through the grapevince, but promptly forgot because…mom brain. So anyway, I tried a few things out and they were pretty awesome.

The first thing I tried was ” Arbonne Essentials”, it’s like a packet of powder you can add to your water. The reason I enjoyed this was because it didn’t taste like other water enhancers I”ve had. It was great and it gave me a little boost.

I tried out some of this stuff too. I”m a tea snob, but I liked this tea a lot. I actually made ice tea out of it, beacuse it’s 3,000 degrees outside. I tried the shake too (it also came in vanilla), and I mixed it with water. It was ok, but if I had mixed it with almond milk or something like that, it might have been a little more smooth on the way down.

By far, my FAVORITE stuff was this… 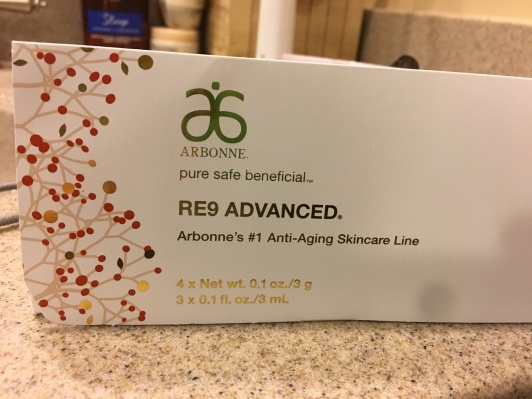 This is their anti-aging skincare line, and DAMN did I need it. There’s face wash, toner, night repair cream, intensive serum cream, corrective eye cream and more. Once in the morning and once at night, it took me approximately two minutes to add this into my routine. So that’s pretty rad.

I spend most of my time shocked at how different I look from when I was younger. I stare at my wrinkles. I have grey hair popping up everywhere, and I”m constantly tired. That’s called growing up, I suppose. I’m thirty-two in August and being able to take those two minutes into my day for my own self-care is pretty remarkable for my self esteem.

I didn’t love all the samples that were given to me. I didn’t like the mascara, for me it just clumped up my lashes. But, overall, this stuff is pretty good.

So, if you are looking for a super simple, healthy way to get some self-care into your life, I would reccomend Arbonne to you. This isn’t an advertisement, this is just an honest review I wanted to share with my crew.

If you think this stuff sounds rad, you can hit up this lady, Angela at http://www.angelachristou.arbonne.com.